Before the Trans Canada Trail was established, trains and tracks covered these trails.

CPR's Montreal & Western Railway was built as the Montreal Northern Colonization Railway Company through to St-Jerome by 1876 (to Ste Agathe des Monts (mp 44.4 from Ste-Thérèse) in 1892, to Labelle (mp 80.2) in 1894, to Nominingue (mp 103.7) in 1903 and to Mont Laurier (mp 138.2) in 1909). The line beyond Ste-Agathe was abandoned by 1989 and the southern reaches were abandoned the next year, allowing construction of the le P'tit Train du Nord trail which also hosts the Trans Canada Trail.

The Campbellford subdivision begins in Belleville at mile 0 and the junction with the Gananoque subdivision. Midland railway (later the Grand Trunk and then CNR) constructed the railroad from Belleville to Campbellford in 1878 (to Peterborough in 1879 and to Omemee in 1883). The Trans Canada Trail occupies the abandoned stretch of rail bed from Anson (mp 19.76, junction with Maynooth subdivision) through Lindsay (mp 86.39). Abandonment took place in 1987. 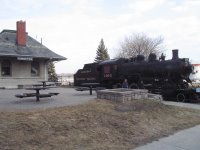 The Kingston & Pembroke railway eventually became part of the CPR system as the Kingston subdivision. From Kingston, the line through to Sharbot Lake was constructed by 1875 (to Mississippi in 1877, to Lavant in 1881 and to Renfrew in 1883). The CPR measured the miles south from Pembroke. The Trans Canada Trail will occupy the rail bed north to Sharbot Lake where the trail then heads west on the former Havelock subdivision. The rail between Sharbot Lake and Tichborne had been abandoned by 1964. South of Tichborne, the steel was removed by the end of 1986. The turntable from the K&P's Kingston station lives on in Wakefield, Québec, turning the excursion steam train. See the photographs in post concerning the Maniwaki subdivision. 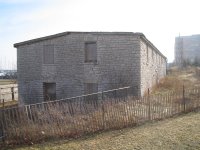 The turntable and round house are long gone but the nearby stone-construction oil warehouse still stands (2006). 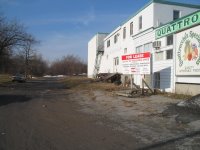 The trains once supplied Quattrocchi's fruit and vegetable warehouse at Montreal and Railway streets, 1.4 miles from the inner station. 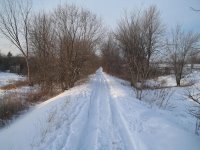 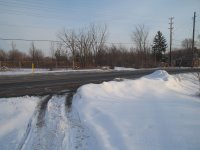 The right-of-way crosses Sydenham Road 5.1 miles from the inner station. 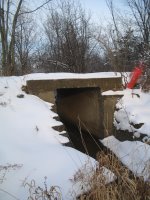 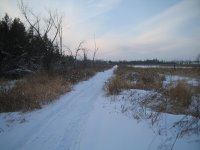 Highway 401 can be seen on the far right (north), six miles from the inner station.
posted by elyob_ragad  # 1:32 PM 0 comments

The Havelock subdivision was built by the CPR as the Ontario & Quebec railway from Glen Tay to Toronto in 1884. Long after abandonment of the rails beyond Glen Tay (through Tweed by 1971 and then to Havelock in 1988), the Trans Canada Trail occupies the rail bed from Sharbot Lake to Bonarlaw where the Trans Canada Trail turns south on the Hastings Heritage Trail and the former Maynooth subdivision.

The Maynooth subdivision begins in Trenton at mile 0, the junction with the Deseronto and Picton subdivisions. The Maynooth subdivision was constructed as the Central Ontario railway through to Eldorado by 1884 and eventually on to Wallace by 1911. The Hastings Heritage Trail now occupies the right-of-way north of Anson (mile post 15.39) and the junction with the Campbellford subdivision. Abandonment from Belmar through Maynooth took place in 1985. The line between Trenton and Belmar was abandoned in 1985. The Trans-Canada Trail shares the path through to Bonarlaw (mile post 24.98). In 2004, the ballast was still deep and biking or running was difficult.

The Canada Central Railway built a broad-gauge line from Ottawa West to Carleton Place by the end of 1870. It would be ten years before the conversion to standard-gauge tracks and then takeover by the Canadian Pacific Railway. The depot in Ottawa West (then known as Chaudiere) was located on Broad Street, only a few blocks from today's O-Train station at Bayview (OCTranspo 2006). The OCTranspo bus dedicated transitway between Bayview Road and just past Roosevelt Avenue (location of the former Westboro CPR station) was constructed in a cut under the right-of-way which had been abandoned by 1982. Beyond the western fringe of the Ottawa Parkway, a bike trail occupies the right-of-way through to Acres Road where the trail turns west on the former Renfrew subdivision. This bike trail hosts the Rideau Trail and the Trans Canada Trail, passing the locations of former stations at Britannia and Graham Bay. The right-of-way east of the crossing of the Beachburg subdivision had been abandoned by 1967. West of the junctions with the Beachburg subdivision (Bells Junction), the Trans Canada Trail rejoins the Carleton Place subdivision. The only remnant of rail on the Carleton Place subdivision is a runt of track at what was once the crossing of the Beachburg subdivision (Bells Jct). This curving connecting track to the Beachburg sub contains more than twenty resting cars of various industrial types (June 2006). This connecting track has existed since the Ottawa side of the Carleton Place sub was abandoned in 1967. 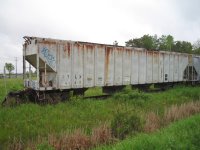 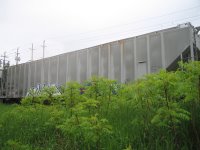 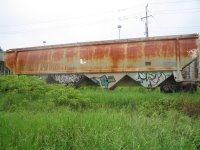 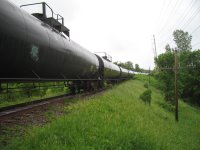 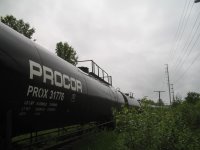 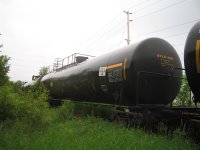 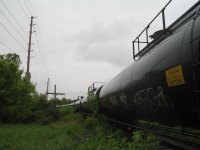 The Ottawa-Carleton Trailway (and the Trans Canada Trail) occupy the rail bed from behind Fitzgerald Road in Bells Corners through to Carleton Place. This portion of the line had not been abandoned until 1990. HISTORY OF THE LINE A track from Ottawa to Carleton Place was built by the Canada Central Railway Company, opened to traffic in 1870 and became part of the Canadian Pacific system when CP took over the Canada Central Railway Company in 1881. The track between mile points 1.4 and 8.1 was ordered abandoned in 1967 by the Board of Transport Commissioners Order No. 125356; trackage from mile point 0.84 to 1.4 was abandoned in 1970 by Order No. R-9675 of the RTC of the CTC. LOCATION OF THE LINE A map of the area is attached. The Carleton Place Subdivision is located in and to the west of Ottawa, Ontario. The subdivision commences at Bells Junction at mile 7.5 in the Ottawa suburb of Nepean and runs westward to a point near Carleton Place, (Mileage 28.1) where it connects with the CP Chalk River Subdivision. The stations located on the line are Stittsville, Ashton and Carleton Place. CONDITION OF THE TRACK Generally, the track can be described as in good condition. All of the rail is 100 lbs type of which approximately 18.7 miles were rolled and laid in 1975. The remainder of the rail was rolled in 1929 and laid in 1930. The ties are treated softwood and are in fair condition. The ballast is crushed rock. The drainage is regarded as adequate. The permissible speed is restricted to a maximum of 75 miles per hour for passenger trains and 45 miles per hour for freight train operations. SERVICES ON THE BRANCH LINE VIA Rail Canada Inc. (hereinafter VIA) operates a passenger train service daily on this Subdivision. Its train "The Canadian" uses this branch line as part of its transcontinental route. The train has scheduled stops once each day westbound and eastbound at Ottawa and Carleton Place. In contrast, freight train service is only available "as and when required" due to the absence of demand for this service. CARLOAD TRAFFIC Carload traffic has been nearly non-existent over the past four years...

The subdivision begins at Laman [LA(chute) & Man(iwaki) subdivisions], the junction with the Lachute subdivision. Before 1966, the junction with the Lachute subdivision was located about 1200 metres southwest, on the property of what is now the Casino du Lac-Leamy (2006). Therefore, the modern location of Laman actually starts the subdivision at mile post 1.4. The Ottawa & Gatineau Valley railway first built rail from Laman to Wakefield in 1889 (to Farrellton in 1892, to Venosta in 1893, to Wright in 1894 and to Gracefield in 1896). The Venosta station building survives (2005). By 1986, the CPR abandoned the railbed north of Wakefield. This portion of the subdivision, from Wakefield to Gatineau (formerly Hull) is now host to the Wakefield steam train. See the video presentation below. The steam train runs an excursion operation with a 1907 2-8-0 imported from Sweden. The rolling stock is also from Sweden. The seven coaches were built between 1942 and 1944. The club car was built in 1931. North of Low, the railbed is now part of the Trans Canada Trail hiking network. In segments, I have snowshoed the trail from Low through Gracefield. The trail also hosts snowmobiles.
Immediately north of the steam train station (165 rue Deveault), the rail crosses boulevard St-Joseph (route 105). 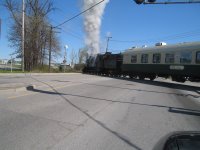 Before Chelsea, the rail crosses back over route 105. 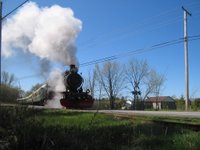 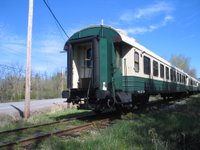 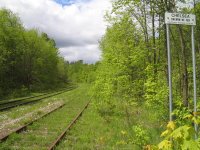 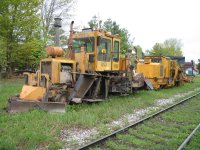 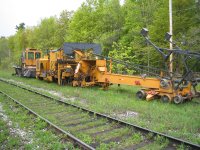 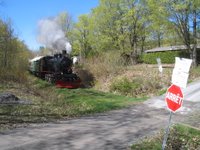 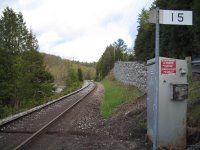 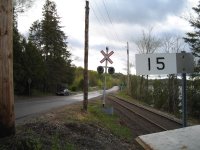 Farm Point
Behind the bridge, the mine (and its spur, closed since 1969) can still be seen. 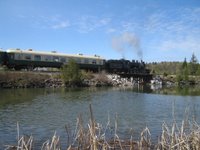 The steam train has passed the former CPR station at Wakefield and slows before the water tower and Canada's last operating manual turntable (mp 19.7). In 1912, this turntable served the Kingston & Pembroke railway in Kingston. 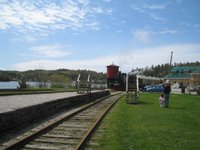 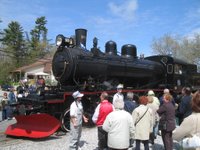 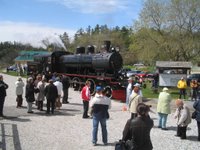 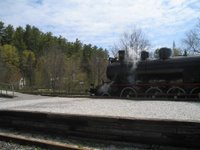 This bridge over the Picanoc once marked the crossing of the rails between Perras and Eagle stations. 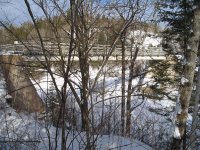